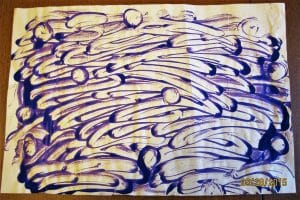 One end I called Splash and Spill; the other I called Squelch and Kill. The difference between the two ends is clear. The labels are meant to be amusing and light hearted. As Montessorians we strive to always be in the middle of the continuum. Life in the environment is not always predictable even though we teach and model expected behavior.

Splash-and-spill occurs. A child may spill a bucket of water on the floor, rub unneeded glue on a rug or table, hide a used paper towel in a drawer near the sink instead of putting it in the trash can, fail to return work to its place on the shelf or not clean up their work space. It requires that we gently, creatively, and consistently teach and mentor our expectations for classroom behavior.

On the other hand, unintentional or ignorant behavior by adults can also cause squelch-and-kill. For example, visiting adults may not always wish to follow our suggestions about how to observe in the environment. In one case, two men in suits and overcoats from the development department of the school system stood in a corner of the room to watch, instead of accepting the chairs I offered. Three boys asked me why “plainclothesmen” were in our environment. I explained to the students that the men were observing the classroom process, but meanwhile the distraction to our work was obvious.
In another example, a parent of a special-needs child met with a social worker in the middle of our environment after observing the child, to discuss what they learned. They were unaware that they were standing in the space the children needed to do their Special Work. In a quiet voice, I had to ask the adults to take their discussion out of the classroom. Again, it requires that we gently, creatively, and consistently model our classroom expectations.

Knowing that my environment was slightly left of center, I asked my fellow teachers how the children behaved after returning from art. Some teachers reported that the children needed time to reorient themselves to the expectations of their home environment. To help the re-integration process, I started giving Special Work (academic) lessons after cleanup time, requiring students’ attention, listening and observation skills.

Each of the 28 classes I taught had its own flavor and place on the Montessori Education Continuum. All were clustered in the middle; none of them were at either extreme. Our Montessorians were so aware of each child’s needs that we would suggest to each other where each student be placed in the next level for continued success.